The Baobab:The Baobab tree (Adansonia Digitata) has been identified as the largest succulent plant in the world growing to over twenty five metres high. Baobabs are slow growing adding, on average, one metre to their height and thirty centimetres to their diameter a year. They are however long lasting, with their effective control of water loss protecting them against extreme drought and their spongy bark providing protection against fire. In addition to this, Baobabs face no serious recorded threat from pests or 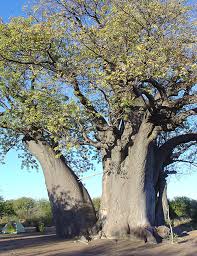 diseases; together these factors have contributed to Baobabs life span being dated at over two thousand years.

Baobabs ability to withstand a variety of soils means they thrive across both Africa and Australia, with new saplings growing as a result of seed dispersal by local weather and wildlife. Numerous cultures celebrate the versatility of the Baobabs various components and the contribution these make not only as a source of income, but also to folklore and traditional medicine. These components are flowers, fruit, bark, seeds (pulp and oil), and leaves and each has its own unique characteristics and uses (Table.1). Studies have shown the quality of these components varies across species and locations and, as Baobabs respond well to grafting, there are opportunities to replicate those that bear high quality produce.

Alongside the oil and pulp,The Baobab has other   elements which  were noted for their qualities and

uses. These vary from using the leaves as a spinach like food stuff that is naturally high in both vitamin A and vitamin C, to extracting dye from the tree’s roots, or using the Baobab fruit and seeds as animal fodder. In addition to these, the outer shell of the fruit can be decorated and sold as a craft product, while the high levels of tartaric acid in the shell has the potential to be used as a natural preservative. Unsustainable use of the Baobabs leaves, roots and bark can compromise the tree itself while harvesting of the fruit poses less risk. However, care should be taken that harvesting fruit, and therefore seeds, does not compromise natural germination processes and therefore the longer term sustainability of Baobab trees